‘What happens when you lose everything? You start again. You start all over again.’ – Maximo Park – Apply Some Pressure

… And then everything changed. I aren’t a person that particularly likes to broadcast their private life to the world, but to cut a long story short, completely out of the blue, I find myself single and possibly without home. I’ll go as far as saying it wasn’t my choice and it wasn’t what I wanted, and it was also utterly and 100% unexpected. A fairly sizeable rug has been pulled from under my feet, and I don’t really know what I’m going to do.

Fortunately for me, I find myself back out on the road with some of the finer people I know, on a (very) quick Sisters tour which was based around the very excellent Sinner’s Day festival in Hasselt, Belgium. It makes sense to put everyone together for a week of gigs rather than a one-off, so we had decided to do the rounds of a few places the band hasn’t been for a long time.

I don’t want to go into it all too much, but this has been a completely shitty time for me, and not just because of this. As mentioned before, I lost one of my best friends less than two months ago (ironically, not that it’s ironic, but when the news was imparted of my impending singledom, the first thing I thought was that I could go and stay with my departed pal Chris for a bit). 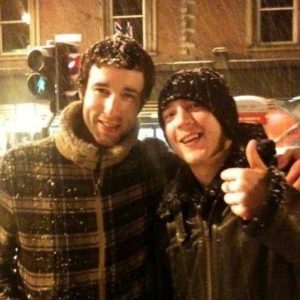 Fortunately, I couldn’t ask to be in the company of better pals, really. Some of the people here with me have been incredibly sympathetic, as well as offering a very large and much-needed dose of pragmatism, is rapidly becoming my best friend.

I’ve got lots to be grateful for, and I need to focus on that. Friendship and camaraderie will bring me through the worst first bit of this, and then a hearty thud of Yorkshire stoicism will guide me through the coming months, and probably years. No part of me chose this, but here I am, and I’m not going anywhere, so I’ve got to suss it out.

On a more positive note, the gigs have been going really well. I always love going to Norwich – it gets a bad press, but that is a beautiful city and the venues are all really good.

Belgium is the Sisters’ second home, and the festival is amazing – we’re topping the bill, with OMD, Tricky and Public Image Ltd on before us and ALL putting in amazing shows, particularly Tricky, who I’ve loved since I was a kid. I worked for OMD last year all Summer, doing a festival run around Europe, so it is absolutely brilliant to see Andy and Paul, as well as the fantastic crew, who I had really hit it off with. Obviously they are taking the piss massively as they’re used to seeing me in a different kind of role and, as I always hope to rely on good friends to do, they do their utmost to knock me down a peg or six when they see me in my leather jacket with sunglasses on my head.

The gig is great and we retire to the hotel bar, where we have a hilarious and occasionally terrifying evening with Tricky and his band, who he appears to have only met that weekend. These amazing times occur occasionally and I pinch myself that I get to have these experiences with people I’ve paid to go and see maybe a dozen times over my lifetime of being a music fan. 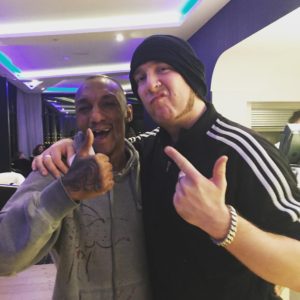 Birmingham last night was a stormer despite some technical problems, and I’m really looking forward to tonight’s gig at Bristol Academy. The last one here was at the end of a looooong tour and I don’t have the fondest of memories of that, so it’ll be good to get up and right some wrongs. I’m playing every gig like it’s my last at the minute… I guess I’m channelling my fallen friend, who was an amazing musician as well as being a generally brilliant person. I hope it’s not too trite to say that I’m doing it for him.

I’m in the studio tomorrow for an afternoon while I’m passing as I want to do a load of bits to fill in the gaps between songs. To be honest I just want an excuse to see the brilliant Dave Draper again. Since ‘it’ all happened, I’ve actually re-written two of the songs for the solo album more or less start to end. One is pretty savage and I don’t think I’ll change the original… it would be the wrong kind of evisceration. The other actually lets the words flow a lot better and it all makes more sense now, so I’ll go re-do that when I get home.

It’s weird, I’ve said for years that sometimes the real meaning of a song might only reveal itself six months after you’ve written it. You’ve got to allow it to breathe so that it can take on its own meaning; it’s why I like ambiguity and wordplay in lyrics. Anyway less of that bollocks.

I’m off for a drink. Actually that’s not true, I’m trying to limit my drinking, as booze is just making me feel worse and think… worser. But a trip to Bristol Academy without a trip to The Hatchet wouldn’t be right, even if I’ll be on lime and soda.

No shows booked at the moment.